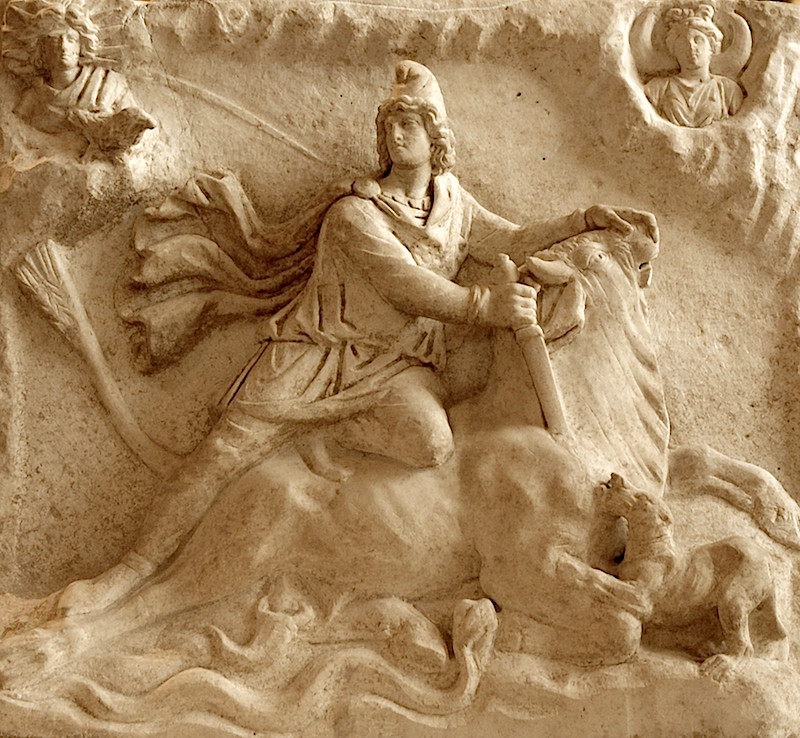 Notes began to fall into place in a cave beneath a prison, wavelengths so clear as to form a picture, one that could not be ambiguous in showing Nico his error. He was tangled up in Laney, like they were two olive trees. But also there was Mithras in his freedom cap, his knee on the beast, a dagger plunged into a region void of vital arteries. He was looking over his shoulder, looking at the sun god who had commanded the sacrifice. He was pulling the bull’s head up by the nostrils, trying to calm him and thus capturing the moment before a revolution. The plot twist of Mithras’ sacrifice was being immortalized in stone. He’d done as instructed, but in preparation for reprisal, when he’d push with his knee to pull the dagger out and face his commander. He’d placed the knife just so, avoiding a deadly placement of the jab. Mithras, keeper of livestock, was not slaying the bull. He was saving it.

The weight of understanding kept Nico’s eyelids shut, his body immobilized as he realized the gravity of his prior misunderstanding. As thousands of lifetimes rode by in a technicolor stream, babies kicked, mounds were built, dreams were crushed on stairs and Shiva kept dancing. Nils and Carlos perceived only a mere second in the passage of time, but Vicky and Nico’s faces were suddenly stained with experience. A weary line stretched between each pair of brows and a tear slid down Vicky’s cheek as she mourned Nico’s thousand untimely ends. The lights flickered as a smoldering Mercedes Knight on the other side of the wall prepared to ignite with the beat of a drum. Nils reached down to grab the pair of enlaced hands and brought his lips to Vicky’s ear, then whispered a timeless two-word command, one that would echo through even red-green trees. “Go forward.”