If you’ve ever wondered about predicting the future, you’ve probably noticed that some people are more right than others. When it comes to technology, it’s a pretty safe bet to look to Ray Kurzweil, inventor, author and engineer, quite simply because he can’t stand to be wrong (you could also try the Simpsons).

Kurzweil, between sessions of stuffing vitamins down his throat, has been unabashedly making predictions for years. Criticism, from the positive to the voracious, has followed. But perhaps the most telling appreciation comes from Kurzweil himself. Designed as a rebuttal to naysayers, the list of predictions from the 1999 work The Age of Spiritual Machines and 2005’s The Singularity is Near details why Kurzweil, even when he’s wrong about what should be existing by now, is actually right.

Kurtzweil is an extremely intelligent, motivated and curious person. He’s also proud. When he gazes into his crystal ball, the back of his mind whispers that this can be true and that it must be true. He finds a way to make it so…which is why you should be paying attention.

The predictions continue for the decades to come, but the most pertinent are the ones we can examine today to decide if they’re valid or not. The 1999 list details tech talk that should be du jour in 2009. Of the 147 meant to be reality 4 years ago, Ray concedes that 12 are “essentially correct” and that 17 are “partially correct”, a clever way to express being wrong. A shining 115 are argued to be correct. This leaves a lonely 3 that are deemed “wrong” by Kurzweil himself:

-Keyboards exist, but most text is created by speaking.

-Intelligent highway systems are in use, although conventional local roads still exist.

-Microsoft (or some other un-named northwestern US company) has reached a $1 trillion market cap.

Well, the self-assessment of 2% wrong doesn’t fly in Kurzweil academy and you can be sure that these projects will get resources to make them reality soon. Invest in Dragon Dictate! Keyboard schmeyboard. Sell your car with that pesky steering wheel! And concede that Google has surpassed Microsoft. Did I mention that Ray is the Director of Engineering at Google?

His most pertinent predictions come from The Singularity is Near because they are for 2010, or more loosely, the 2010s. A quick analysis of these leads Kurzweil to reason that only 3 are not completely true:

Well, less than 2 years after writing this analysis, Kurzweil moved into his cube as Director of Engineering at Google. How long after this did prediction 1 come true? Roughly 1 month for Google Glass to produce Edward-Snowden look-alike Beta testers. And #2? Well, that depends on whether or not you consider cardboard to be a legitimate virtual reality material. But besides democratizing virtuality, Google is now chomping at the bit to release their creepily-competent answer to Siri (which Kurzweil touts as another one of his babies). In short, he’s making reality and shaping the future.

Let’s get back to that virtual assistant one. Google Now is most certainly not the endpoint in mind. Google [X], the Bond-esque R&D offshoot, has the ambition to create an artificial neural network (read: artificial human brain) and Kurzweil is the providing the impetus. This seems to represent Kurzweil’s life work so strap in, kiddos. The Singularity is…are we there yet? I have to go pee-pee. 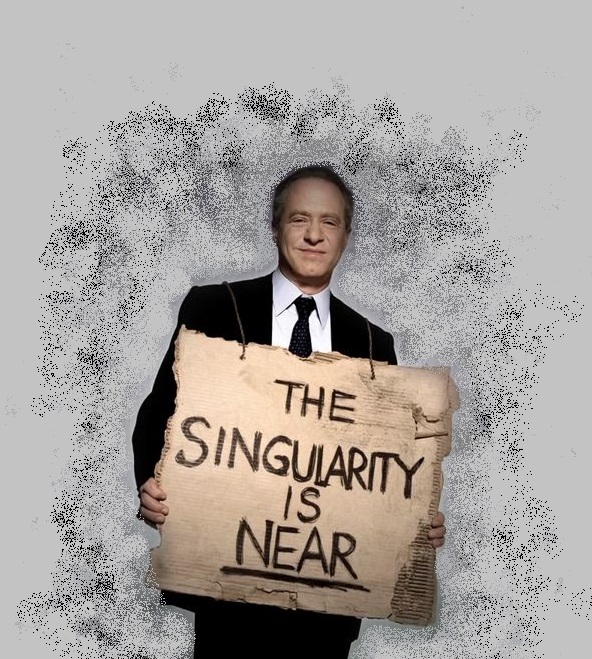