Yesterday was the 14th of July and I’d taken my three sons to see fireworks in a nostalgic reenactment of the displays that closed the 4th of July barbecues of my youth. The cracking of the third round of fireworks was beginning to unnerve a group of swans in the canal just in front of us. As they grouped together, trying their best to look mighty while the sky filled with fire, the spaces in between the crackling bursts were what drew my attention. Every pause in firework launching made me picture an army of little men scurrying around tiny cannons in a patriotic frenzy to guarantee unabashed glee for the city’s children. I didn’t know how firework launchers worked and I enjoyed believing it was still a dangerous, mechanical process that involved men with blackened hands and faces working quickly in a cooperative effort.

“They’ll love this one,” would say a young guy with a beige technician’s suit as he dropped the explosives into a long tube.

“Faster Jimmy,” would reply another as he ran back and forth between the stockpile and the cannon. They would feverishly gather up different shapes and sizes of fireworks and stuff them into the various launchers. “This one’s a newby from China-it’ll knock their socks off!”

“Here we go,” they’d cry in unison as they loaded as many as possible and burned their fingers on the thick braids of twisted-together wicks. This would be the finale, and they’d emerge from a smoldering pit with singed mustaches to an ovation by thousands of soft toddler hands.

But I know that’s not how it works; it probably never did. There’s most likely a machine, isolated on a platform with a pre-programmed firework playlist. I’m tempted to look it up, to know for sure how it works – to see the machine. But I’m afraid it will overwrite my picture of the scurrying men, blotting out their very existence. I can find out anything that is knowable now thanks to the internet. The temptation to solve mysteries is so great that there are almost none left. The mental images of childhood haunts get re-drawn as soon as they’re googled. Obscure references, once-visited places, defunct products and long-lost friends are recalled in a click.

It turns out that no matter how nostalgic you are for some 1980s jingle or product, someone else is even more so.  Years ago I set out, unsuccessfully, to find a picture of the clown that decorated boxes of Happy’s Potato Chips, the Independence Day picnic staple of my mosquito and joy-filled youth. I didn’t find the clown, but I did find a group of people desperately seeking to bring the embodiment of that time in Minneapolis back with the smiling cartoon face. One guy was set on getting a tattoo of the clown and needed a model; another wanted to make a T-shirt. Their longings didn’t even strike me as strange, nor did their fruitless attempts to stalk the old potato chip factory. The clown couldn’t be found online, so for all practical purposes, it didn’t exist.

But some things do exist that we may never see because we’re satisfied with Google’s version of them. There’s a bar that locals in the Sicilian town of Taormina sent me to in the late 1990s, with no explanation except that all tourists need to go there. Its name is simply “The Tourist Bar” – Bar Turrisi and the taxi drivers and hotel owners of the area were all in on the joke. Upon arrival, it became quickly apparent that the whole place is penis-themed, from the napkin dispensers to the sinks that spray water via a giant urethra.  Of course I, too, made sure to recommend the bar to everyone who visits the region, without telling them why. But I wonder if the Bar Turrisi manages to surprise anyone these days or if people just look it up on their I-phone, quickly smirk and swipe onward. Without the mystery, I can’t imagine as many people intentionally going to the penis bar.

On a whim last night, after the fireworks and resisting my temptation to ruin them by knowing too much, I sent Google on a last foolhardy quest for Happy. Someone on Facebook had posted a picture of a woman with a Happy’s truck in the background two years ago. The clown face, even in black and white, was so much less of a disappointment than I’d ever imagined. 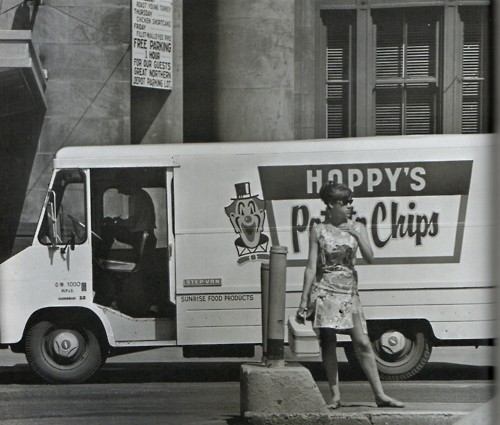