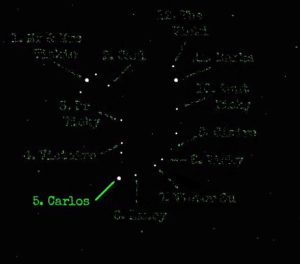 Upon return from his otherworldly meeting with Victoire Lambert, Suresh walked quietly into his apartment so as not to disturb Carl. After his dramatic renaissance from the mental hospital, Carl’s tumor had reawakened and started taking over in unpredictable ways. Suresh pressed $500 into the temporary nurse’s palm and thanked her for her overnight watch as he walked her to the door. He paused to look at a photo of a sad-eyed woman in a sari next to the door frame as he let the nurse out, and with one heart beat contemplated a life that would have been.

The last two months had provided intense conversation, but also invaluable observation, for Dr Vicky. He could see firsthand the effects of the growing mass as it pioneered new territory in Carl’s skull. Parts of his body would tremble and then become momentarily paralyzed before returning to life in jerky fits. Sometimes he’d swear he could smell numbers and letters. As his vision grew cloudier, Suresh would help him more and more with tasks like shaving and making breakfast, until the day he woke up to find that he was completely blind. But he’d still feel his way into the kitchen, swearing he could smell baking cookies, just so he could feel the cold oven door and then go back to bed.

Carl woke several times during the night, sometimes waking up Suresh too as he ran into furniture or dropped pans. On several occasions the tumor’s reach activated poetry he’d learned and forgotten as a young student, which would methodically pace out of Carl’s mouth in his sleep. Dr Vicky now tiptoed to the side of Carl’s couch bed as he spoke.

I fear thee ancient mariner, I fear thy skinny hand

And thou art long and lank and lean as is the ribbed sea sand.

I fear thee and thy glittering eye, and thy skinny hand so brown.

Fear not, fear not, thou Wedding-Guest! This body dropped not down.

He held Carl’s hand, for the first and only time since the hospital, as his brain continued regurgitating memories before letting them go.

And never a saint took pity on my soul in agony.

Suresh kept Carl’s hand in his through two more sections of The Rime of the Ancient Mariner before the cycles switched to silent and Carl’s eyelids stopped flittering through dreams. The next morning they would take their weekly ride on Suresh’s imported Lambretta, something Carl was intensely excited about, but Suresh wanted this moment in the low light of his living room to last a bit longer. He vowed to take as many possible of Carl’s lost memories as his own and made a mental note to buy a Coleridge analogy in the near future.

Carl awoke with no recollection of Dr Vicky’s company nor their plans to have a picnic and ride. He took the news with delight and rejected Suresh’s insistence that he wear a helmet. “Let an old man air out a bit, will you, Doctor?” he said with a grin when he was reminded that the soft spot on his head should especially be protected before his big reunion with Vicky and Laney the next day. They packed a lentil salad-Carl had been won over by the Venkataraman style of eating nothing with a face- and set out on Suresh’s motorcycle.

The air blowing through Carl’s hair felt perfect. It was a different kind of pressure from the grey that had haunted him in his youth and its unpredictable change in direction was like therapy. He could feel the shadows on his skin as they passed under shade trees, flickering heat, cool, heat and cool. Carl allowed his ever-wandering mind to wander even more as he held onto Dr Vicky’s grand torso. His arms reminded him that they too had once loved and held someone tight. There was a great bump and without feeling himself let go, Carl was flying. He seemed both to be soaring and lying still at the same time. He could hear Suresh yelling, “Carl! Carl!” Even his shouting was sing-song pleasant.

Suresh had swerved and slid after a near-miss with a passing car that had ejected Carl and sent him rolling off to the side of the road in a flurry of brown dust. He unpinned himself from under the motorcycle, threw his helmet off and limped to where Carl now lay face up on the ground. He was motionless and smiling faintly; he looked like a stargazer in full daylight. Suresh didn’t grab Carl’s hand as he screamed his name for fear it would be the last time. He instead took Carl’s head between his two hands, framing his face and the grey eyes that looked right through him, no longer shining now, but covered with a milky blur. He spoke to Dr Vicky using a name from lifetimes ago, one Suresh had only seen in Victoire’s file.

Suresh called back, still shouting, “What do you see, Carl? Can you see?”

“No, Carlos,” Carl replied with a broader smile than before. “I can’t hear it either. I can smell it.  It smells just like chocolate cake.” And the smile went slack in slow motion as Carl escaped the pressure of his world.

Suresh’s doctor allowed him to travel to Mexico for the funeral, but he needed a cane, making him look much older than his 48 years. Dr Vicky knew he had to go, not only to pay his respects, but to live up to the guilt of making Carl miss his appointment with his two daughters. They would be there, he knew they would.

At the cemetery an assortment of Catholic villagers cried and swayed for the man they had either never known or had gotten a glimpse of as a young boy. They held up Mrs Méndez, the wailing mother, as she gripped a rosary and white flowers. A woman wrapped in a teal paisley scarf and oversized glasses stood far behind the group, trying to look anonymous, but her other accessory, an impeccably dressed Senator, gave her away.

The other Enders daughter arrived in a parade of young women who bore little resemblance to one another apart from their black hair and varying degrees of disabilities, making Suresh feel guiltier still that his cane was only temporary.  They gathered around the burial site, one of them being pushed in a hot pink wheelchair by a woman with the same pewter eyes that Suresh had stared into the week before. 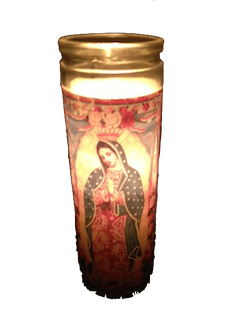