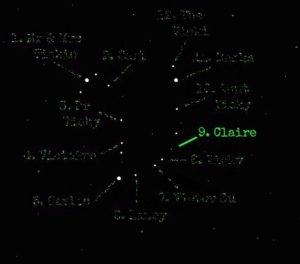 She was formerly known as Mrs Méndez. And before that she was Miss Viereck. But now she was just the elegant yet eccentric Claire, brushing up on her Swahili grammar and Russian calligraphy. She sipped the second cheapest wine on the menu and reassured herself for the thousandth time that she had done the right thing by leaving those girls, their tangled hair, their chapped lips, their sticky hands and their clumsy feet.

It’s not supposed to be easy to leave your family, but for Claire it had been comfortingly so. As her husband pressed his hands to his temples and her two toddlers played in a writhing mass of colorful, urine-scented plastic balls, Claire had watched the shaft of light at the back of the room. It meant there was something beyond those greasy walls and gleefully screaming children. It meant escape. Since anchoring her purse over her shoulder and beginning the deliberate march toward the streak of light in the back, Claire Enders had never looked back.

The newly independent Claire liked to mix together different combinations of perfume. She liked to travel. She liked to make cakes. Sometimes the batter would accidentally slip out of the big pan and make its way into two smaller ones, baking itself into 2 perfect little rounds. In moments like these she had no choice but to decorate them with tiny frosting rosebuds and daisies, then steady her trembling hands to squirt out a cursive L and V before lovingly nestling the little cakes into the trash.

Now 24 years later and two tables over were twin sisters who could easily have been Laney and Vicky. Any time Claire saw twins, they looked like hers, but these ones even had the puffy nose  and twinkling eyes of her husband from another life. See, she thought, those girls are fine. Look how long they’ve been hugging. The two young women walked right by her table, which was covered in texts of non-latin alphabets, before going separate directions. Yes, at least they had each other Claire thought for a few seconds until she remembered to make her way back to memorize a Hopi wedding song.

When Claire returned home from a tour of the Amazon almost a decade later, she noticed the folded newspaper on the kitchen table. She had hesitated to drop it in the recycling bin that morning because of the color photo of Senator Vickie and his wife. She pulled some scissors out of the kitchen drawer to clip around the edges of what had caught her eye. I just have to find a scarf like that. But the burgundy scarf drifted lazily down to the mosaic of tiles that Claire had grouted herself in a series of all-night solo maintenance parties. On the back of the scarf was a want ad. 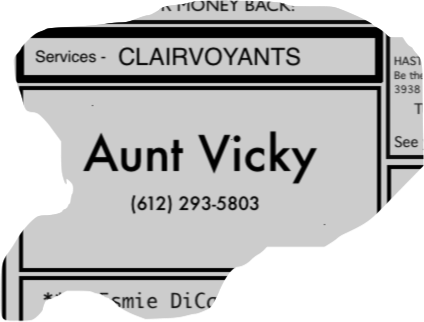