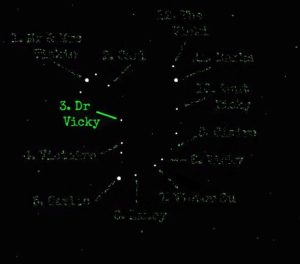 Dr Vicky was experiencing the increased heart rate and reduction in appetite that had only ever accompanied the first stages of love. What he felt for Carl Enders could not be romantic, but then to what could he pin this all-encompassing feeling? He was fascinated by Carl, by his description of the world around him, by his understanding of what was happening at all levels of existence. He was surprised to find out that Carl was also a doctor of sorts, who had earned a PhD in theoretical physics in his former life, and started to amicably refer to him as Dr Enders.

“Suresh, you can read the paper I wrote about simulations if you’re that interested,” Carl would say when the doctor started asking too many questions.

“Dr Enders, I’m not sure I’d follow your logic,” returned Dr Vicky. It felt suspiciously like flirting, but their eyes never met. Furthermore, it wasn’t true. Suresh followed everything Carl said like it was the pure truth, the center of all that religion didn’t have words to explain. He often wondered if what Carl said was the parable or who was saying it. Dr Vicky was afraid to find out.

Two months after checking Carl out of St Tabitha’s on what was supposed to be a weekend pass, hot drinks now warmed their hands in Dr Vicky’s living room, where Carl had stayed ever since. They drank Turkish coffee while they covered the necessary neurology topics and why Carl had drilled the hole. They drank Rooibos tea as they talked about age-old rituals to free the mind of evil spirits, rituals which were documented in the form of smooth-edged holes in skull remains found around the world. They sipped chili-infused hot chocolate as they pondered the medical understanding of the ancients and whether they had feared that their demons would kill them as Carl had feared the pressure would.

On a tangent from Carl’s rambling details about a certain Canadian hot drink, Dr Vicky learned that the wife who had abandoned him, Claire, was also the muse who had left with just as few qualms. Her tendency to misplace steaming cups of coffee in the morning drove Carl to question whether the mugs were being whisked away to parallel universes, just out of view. Each time he found one in an armoire or a cupboard, cold and filled with lesser parts coffee than brandy, he smiled and told Claire her cup had returned from its interstellar quest. And when she’d floated out of his life, he’d told himself that Claire had simply slipped through the ball pit, into another dimension with her coffee cup, the day she never returned.

Male pattern baldness now exposed a perfect circle set high back on Carl’s forehead where the skull was missing and only a layer of skin remained between the soft pulsing of his consciousness and the outside world. Dr Vicky had to continually hold back the desire to drop his mug and touch the soft spot that served as a reclaimed fontanel. Dr Vicky came to understand that Carl’s crude effort to reinstate blood flow to the full brain, an exercise that Carl believed to be completely independent of his simulation research, had gotten him sent to St Tabitha’s in the first place. Carl’s belief that his universe was an illusion was almost irrelevant to his commitment.

Carl’s postdoc work on simulated universes had overlapped with philosophy to such a degree that few colleagues has taken him seriously in the 1970s. But he’d co-authored a paper (and perhaps a prenup, according to Dr Vicky’s notes) with someone named Marka Swandish, another physicist who was finally gaining credibility in her field with studies that searched for evidence of an underlying lattice to the universe.

Dr Vicky was afraid to reach out to Carl’s former colleague for several reasons. But mostly he feared that seeing Marka Swandish again would rekindle the intellectual stimulation that Carl had thrived on before the pressure built. Dr Vicky didn’t want to share his new friend with Ms Swandish, but he knew he’d need to come to terms with Carl’s past soon. It was the right thing to do for this man who spoke poetry in his sleep and had two missing children.

He’d researched every possible source pertaining to the separation of the Enders family at both the county and state level. One name had wormed its way into several documents from different agencies: Victoire Lambert. Her business card was paperclipped to Carl’s file: 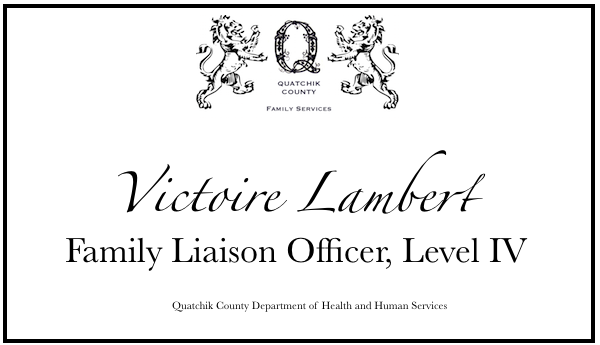